Home ⟩ News ⟩ Head of the IMF responds to your messages

Thousands of us wrote to Kristalina Georgieva, the head of the IMF, with the message that it’s time to bail out people not banks. We called on her to ensure there are clear guidelines for restructuring debts before new loans are issued to help stop fuelling the global debt crisis. Unfortunately her response falls short and doesn’t address the main thing we were asking for. Read her response below: 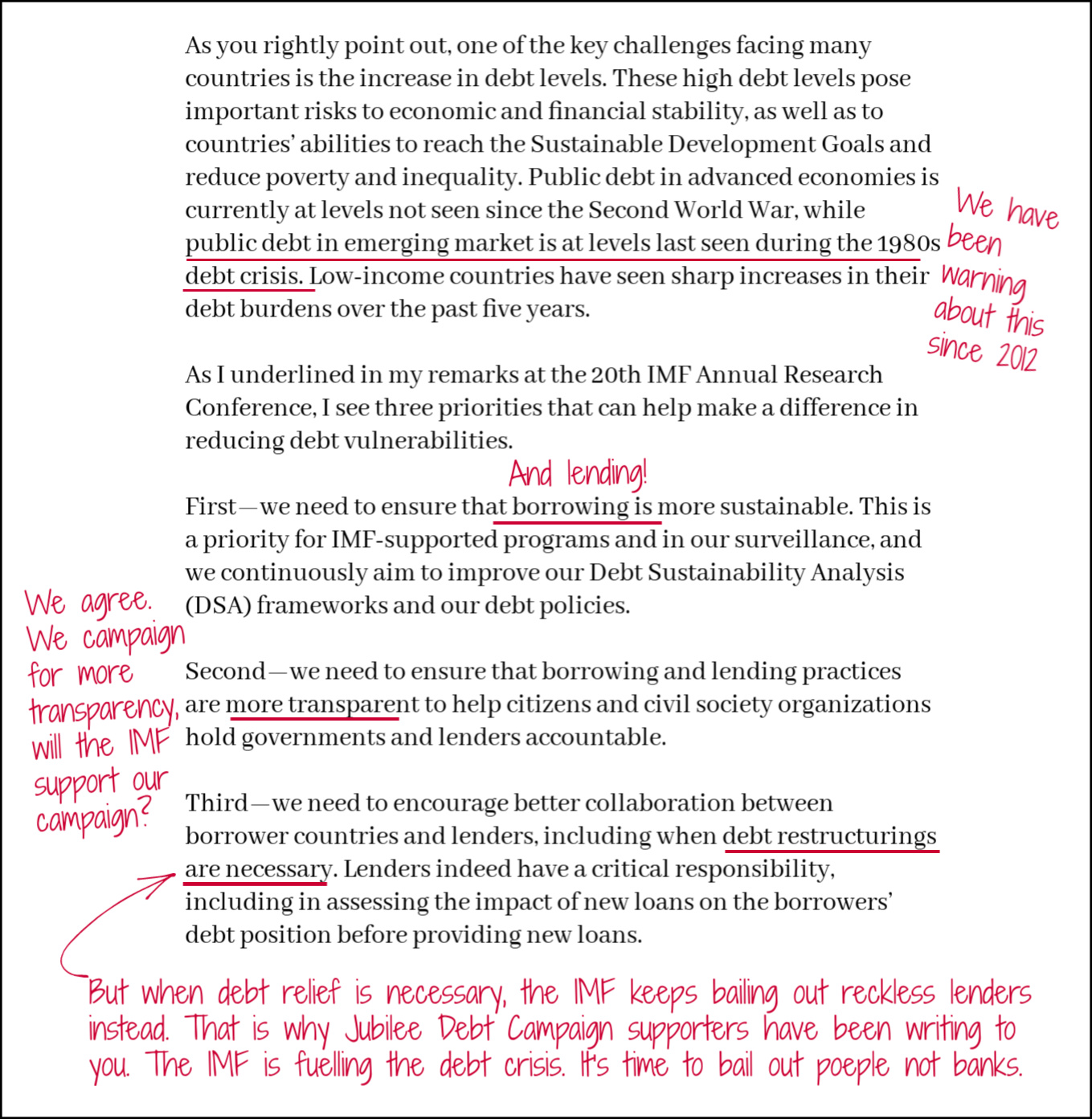 This is a disappointing reply, but the fact that the head of the IMF, the world’s most powerful global financial institution responded to the campaign shows we are having a real impact. We’ll carry on pushing to make sure unfair debts won’t stop countries spending money on essentials like health and education.

When countries are in debt crisis, too often the IMF bails out reckless lenders, extending debt crises while citizens suffer cuts to basic services. We are campaigning for problem debts to be written off or brought down to sustainable levels, rather than irresponsible lenders being bailed out.

In detail: key points on the response from Kristalina Georgieva

Most importantly, the IMF response largely ignores what Jubilee Debt Campaign supporters have been saying to the IMF. Kristalina Georgieva’s letter ignores our proposal for the IMF to adopt clear guidelines so that IMF loans are only given to high debt countries if there is a debt restructuring or default.

On specific things that Kristalina Georgieva does mention:

1) The IMF say: ‘public debt in emerging market is at levels last seen during the 1980s debt crisis. Low-income countries have seen sharp increases in their debt burdens over the past five years.’

We say: We are pleased the IMF is now acknowledging the scale of the crisis we have been warning about since 2012. However, this crisis requires urgent and ambitious action well beyond what is currently being considered by the IMF and political leaders.

2) The IMF say: ‘we need to ensure that borrowing is more sustainable. This is a priority for IMF-supported programs and in our surveillance, and we continuously aim to improve our Debt Sustainability Analysis (DSA) frameworks and our debt policies.’

We say: Both borrowing and lending need to be more sustainable. One of the reason lenders give unsustainable loans is because they know that if debt problems arise the IMF is likely to bail them out. It is disappointing that Kristalina Georgieva does not respond to this point in her response, and that the IMF do not acknowledge their role in contributing to unsustainable lending and borrowing.

3) The IMF say: ‘we need to ensure that borrowing and lending practices are more transparent to help citizens and civil society organizations hold governments and lenders accountable.’

We say: We agree, and have been campaigning for concrete measures to increase the transparency of lending. Much of this needs to be done by people other than the IMF – such as the New York and UK parliaments introducing legislation to require loans to be transparent. However, we would welcome IMF public support for the proposals we have made.

Private banks have agreed a set of voluntary principles to make loans transparent but need a registry in which to disclose these loans. One crucial thing the IMF could do is agree to host that registry, but they have refused to do this so far. Disclosing loan information in a registry run by a public institution, such as the IMF, would make it more likely to continue to exist in the future, and be built on with more lenders and borrowers agreeing to disclose loan information to it.

4) The IMF say: ‘we need to encourage better collaboration between borrower countries and lenders, including when debt restructurings are necessary’

We say: The problem is that often when debt restructurings are necessary, the IMF delays them from happening by lending more money, so debt payments can keep being made. This is the opposite of encouraging better collaboration between borrower countries and lenders on debt restructurings.