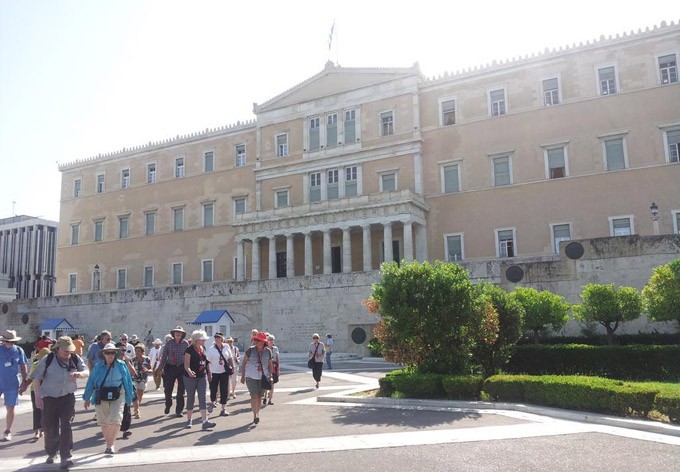 Jubilee Debt Campaign’s co-chair, Roger Chisnall, was in Athens this week for the launch of the preliminary findings of the Greek Truth Committee on Public Debt in the Greek Parliament.

Today he delivered this message of support:

I bring you greetings from the UK, and the debt campaign there. We offer you our support in taking forwards the audit and we commend the forensic approach you have adopted to examining and defining the debt.

We have some history of campaigning on debt in the UK, from the Debt Crisis Network of the early 1990s through Jubilee 2000 and the last 15 years as Jubilee Debt Campaign.

Working with others in the Global South and North, we have seen the cancellation of $130 billion of debt. But still we have no substantive reform of reckless lending and the corrupt, unfair and unsustainable system continues.

We heard yesterday from the Truth Commission on Debt, that the initial outcomes from the debt audit show that the debt comes primarily from bailing out European banks, rather than helping the Greek people. The austerity imposed in the name of paying the illegitimate debt has contravened human rights, and we see no reason why it should be paid.

The costs of cancelling debt should not be recovered from the people of Greece, but from banks which were the real beneficiaries of the bailout.

Jubilee Debt Campaign is working with 30 organisations in 16 countries across Europe to launch a citizens’ petition tomorrow in solidarity with your stance on these illegitimate debts.

We all know that a European conference is urgently needed, to agree debt cancellation for Greece and other countries that need it. This is the top demand in our petition. We think that it should be informed by debt audits like the Truth Commission here, and funded by recovering money from the banks and financial speculators who were the real beneficiaries of bailouts.

These crises will keep repeating across the world until there is agreement on firstly UN rules to deal with government debt crises promptly, fairly and with respect for human rights, and secondly until the banks and financiers learn that we refuse to keep bailing them out for reckless lending.

Arriving at #Greece Parliament in Athens for the Truth commission on #debt today & tomorrow @dropthedebt pic.twitter.com/NwbsJpAGl7

Maria Lucialetti from Brazil. “Everyone knows tgat the banks got the bailouts, not the people” #AuditGR pic.twitter.com/oBfFsrvl1Z — Roger Chisnall (@rogerchisnall) June 17, 2015

Press conference to launch the preliminary findings of the Truth Commission on #Greece debt. #AuditGr pic.twitter.com/3gkm8i8O59