Argentine organisations – led by Nobel Peace Prize winner Adolfo Pérez Esquivel – have denounced the violation of sovereignty and the illegitimacy of the debt claimed by vulture fund NML Capital in its attack through the Ghanaian courts. 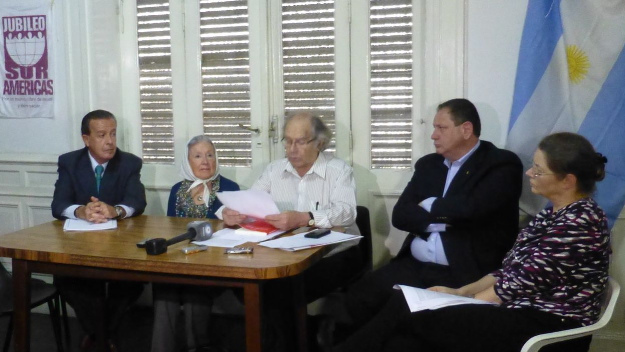 Buenos Aires, October 31, 2012 – Argentine organizations, led by Nobel Peace Prize Laureate Adolfo Pérez Esquivel, and the Mothers of Plaza de Mayo Founders’ Line, Nora Cortiñas and Mirta Baravalle, announced in a Buenos Aires press conference the launching of initiatives in response to the sequestering of the Frigate ARA Liberty. The ship has been held in Ghana since October 2nd as a result of judicial action by the vulture fund NML Capital Ltd. This vulture is known for its attacks against Peru and, more recently, for being the major financier of Mitt Romney’s US presidential bid and the manager of large investments by his wife, Ann Romney.

Dialogue 2000-Jubilee South Argentina, SERPAJ and the Illegitimate Debt Program of the Lutheran World Federation, the main drivers behind the new campaign, rejected as unlawful the retention of the Argentine training ship, a reminder of times they had hoped surpassed when great powers boarded boats, customs houses, ports and entire countries at cannon point in order to collect the debts they claimed. But their denunciations and demands focused on the illegality and illegitimacy of debt claims in the hands of the vulture fund NML Capital Ltd: bonds that were issued by the government of Menem and Cavallo in the “neoliberal spring” of the ‘90s and defaulted in December 2001, when the debt bomb exploded in Argentina together with the consequences of the structural adjustment policies imposed via the Washington Consensus, purportedly in order to deactivate it.

“The debt claimed through this highly symbolic action is illegitimate debt” – Pérez Esquivel underscored – “successor bonds to the debt contracted over the blood of the people during the civil-military dictatorship and declared fraudulent and arbitrary in federal courts. The Argentine government must accept once and for all to audit the pending claims and separate the illegal and illegitimate debt from that which might be legitimate. It must stop paying debts that the Argentine people do not owe.”

Pérez Esquivel announced the sending of a letter to Ghanaian President John Dramani Mahama, in order to share with him this fundamental aspect of the vulture fund’s claim and to offer further information as well as his willingness even to travel to Ghana, if it would contribute to the release of the ship. He also reported that Argentine organizations and jurists are preparing an “Amicus curiae” to present to the Ghanaian courts and that they have requested the involvement of the UN Independent Expert on Debt and Human Rights, Dr. Cephas Lumina.

Historian Alejandro Olmos Gaona informed that the Open letter being sent in parallel to Argentine President Cristina Fernandez de Kirchner, highlights the waiver of sovereign immunity and legal jurisdiction – both clauses in the bonds now in the hands of vulture funds – as one of the central issues to be addressed. National Deputy Fabian Rogel reported the presentation of a bill that would end the practice, also begun during the dictatorship and maintained almost unchanged until now. He further stressed the organizations’ call to the President, to end foreign jurisdictions such as ICSID and never again renounce State sovereignty and immunity.

In their interventions, Nora Cortiñas emphasized the common thread joining the 30,000 disappeared, the accumulation of illegitimate debt and the challenge of ending the impunity that continues to protect those responsible both domestically and internationally, and Dialogue 2000-Jubilee South Argentina coordinator, Beverly Keene, invited movements and organizations to unite behind these demands and stressed the hope that this new debt attack serves to strengthen the mobilization against the advance of speculative interests and the power of the financial markets:

“Argentina needs to build unity among governments in the region, with Africa and Asia, in order to win this battle” – Keene emphasized – “it is human rights, the rights of peoples and of nature, versus the alleged rights of capital. We cannot yield.”