Home ⟩ News ⟩ Philippines: The typhoon and the debt 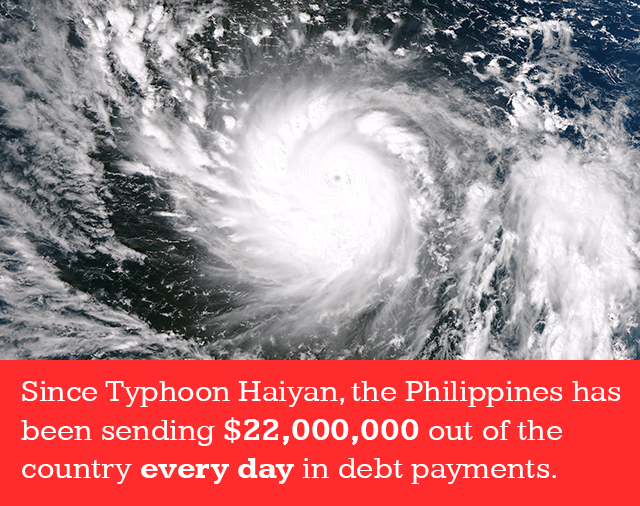 Two weeks on from Typhoon Haiyan (Yolanda) in the Philippines, the British public have responded with incredible generosity, donating over £50 million to the Disasters Emergency Committee so far.

Yet the shocking truth is that the same amount of money leaves the Philippines in debt payments every three and a half days.

In fact, since the typhoon struck on 8 November, the Philippines has spent more than $375 million (£230 million) paying off overseas debts. And it will spend a total of $8 billion (£5 billion) this year.

That’s why, along with our partners in the Freedom from Debt Coalition, Philippines and Jubilee South – Asia Pacific Movement on Debt and Development, we’ve launched an urgent action calling on international lenders to drop the Philippines’ debt.

Make no mistake, the Philippines urgently needs emergency assistance to cope with the devastation the typhoon has caused. But in the weeks and months ahead, as the world’s media moves on, the government will also need funds for rehabilitation of roads, bridges, schools, hospitals and other infrastructure, to get the affected regions back on their feet.

Origins of the debt

The horrendous impacts of the world’s largest ever recorded storm are reason enough why public lenders like the World Bank and the Asian Development Bank should question the $60 billion debt burden claimed from the Philippines.

Yet many of these debts are inherited from the odious rule of Ferdinand Marcos in the 1970s and 80s – a period of Martial Law when loans poured in from these same international lenders, who turned a blind eye to the government’s crimes and corruption. As the Freedom from Debt Coalition asks: ‘Why pay debts we don’t owe?’ They are calling for an audit into the debts to find out which are illegitimate and should never be paid.

What’s more, while the rich world has sent its aircraft carriers to the Philippines to dispense aid on TV, away from the cameras their negotiators have been resisting a fair deal to compensate impoverished countries for the impacts of extreme weather events worsened by climate change. Campaigners in the global South point out that rich industrialised countries owe a far greater climate debt to the Philippines because of their excessive greenhouse gas emissions, which are causing climate change.