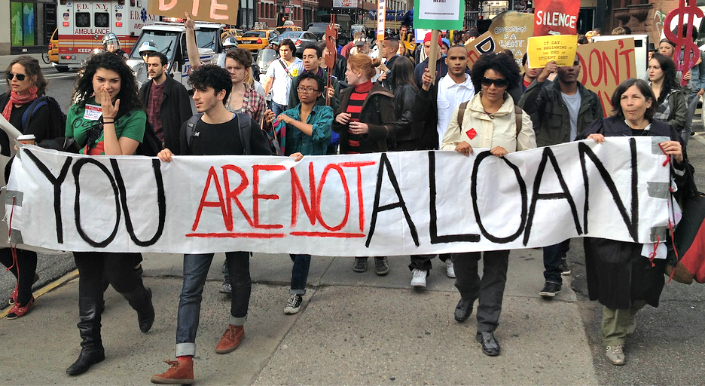 Since the introduction of top up fees by Tony Blair’s Labour government in 1998, the UK Higher Education system has ballooned into one of the most expensive in the world. The tripling of fees by the Coalition government was ushered in alongside a raft of funding reforms that brought universities further into the minefield of marketisation. This is affecting both the nature of university management and speeding up a process whereby students and staff alike occupy an ever more precarious role within their institutions.

For young people today, the spectre of debt strikes early. And it strikes hard.

Courses are being shaped to the whims of employers, and students are being delivered fresh out of graduation as mass-produced tools for the market, bound by an average personal debt of £32,200 set to rise to over £50,000 – leaving them with little alternative other than to submit to a lifetime of labour exploitation.

The government’s abolition of grants to support students through education in favour of loans has been coupled with an increasing reliance among students on predatory payday lenders and credit, when loans don’t stretch nearly far enough to cover the skyrocketing cost of accommodation, living and hidden course costs. Students are left with no option than to take up jobs alongside their courses to make it to the end of the month, only to be preyed upon by employers offering low paid and casualised zero hours employment that undermine workers’ rights, forming a fragile and pacified workforce.

The marketisation of education has brought with it atomisation both between institutions, and within institutions. University competes with university to attract student cohorts and funding, and students are pitted against staff trying to save their jobs against blunt managerial tools like the National Student Survey.

Whilst the assaults against the education sector under this market regime are wide-ranging – with lecturer wages and conditions under attack, support staff targeted, exploited and outsourced, courses being dismantled and student activism being repressed – an ever more inward-facing mentality has taken hold of the sector, eroding the resistance that once characterised such spaces, and the so-called “community of learning” that they once aimed to create.

Precarity breeds debt, and as the government inject ever more insecurity among staff and students, they create the conditions of compliance for their neoliberal ambitions by paralysing them in the stifling spiral of debt.

Among Black and brown communities, in many cases as children of migrants and refugees, there is a particular poignancy to the ideal of education as the great liberator – the pathway to uplifting communities to combating enforced deprivation.

But the prospect of lifelong debt, compounding debt and intergenerational poverty within working class racialised communities has gone a way to deflating these ideals, pricing young working class Black and brown people out of university, or driving them out amidst unmanageable expense.

Even upon entering the job market, Black and brown students are faced with the ever-present reality of racism. Report after report has chronicled how racialised people disproportionately occupy lower paying rungs in employment, find career progression stagnant, or are concentrated in casualised and precarious work conditions. Theresa May’s hostile environment immigration policies have seen crackdowns on the informal economies built up within Black and brown communities and the brutal repression of migrants has pushed migrant communities, already living precariously before, to the knife edge of exploitation and fear.

The marketisation of education is part and parcel of a wider program of dismantling the welfare state and deregulating the public sector. A process which enriches the elite while harming the livelihoods and future of the vast majority of our society.

Towards a brighter future

I believe free education can be achieved through a more equitable and democratic distribution of wealth and public expenditure within the UK which can also ensure a free healthcare system, good social housing and public services available to all.

If education is to be a tool of emancipation, it must itself be free from the dictates of deep-pocketed profit-makers, and if students are to help bring the gains of education to benefit all people they themselves need to be free from the burden of lifelong debt – either in the form of loans or a ‘graduate tax’.

Free education is also a crucial step towards an education system that truly works for society, and which contributes to the betterment of society – not just in economic terms, but which also adds to the wealth of knowledge, skills and perspectives available. An education system that is more democratic is also one that is more dynamic and which can better inform responses to the needs of the people better.

It is now more important than ever to build a broad based movement to champion the right of education as a social good and to liberate young people from being bound by debt. The fight for this is intrinsically tied to combatting the marketisation of our universities and all its ills, and defending the rights of workers at these institutions whether it’s fair pay for graduate teaching assistants or the recent victories of migrant workers at LSE and SOAS to be brought in house. We must continue to ensure that conversations for free, liberated and accessible education system are taking place on every campus across the UK.