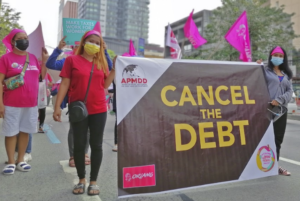 As the multiple crises of global health, climate and debt continue to engulf the global South, women are bearing the brunt of the impact as resources are diverted to debt repayments and away from quality public services that women rely on.

Global South debt now stands at its highest level for over two decades, preventing countries from recovering from the Covid pandemic as well as hampering efforts to fight the climate emergency. And with interest rates on the rise, the pressures being faced by lower income countries are set to intensify.

Global South countries have been forced to borrow to make ends meet because of a global economy that is wired in the interests of wealthy governments and corporations. But debt strips the ability of countries to invest in the things that matter to women and instead prioritises repayments to creditors at the expense of basic human rights and women’s rights in particular

Even before the pandemic, our research showed that the growing debt burdens of lower income countries were already contributing to public sector cuts. We found that of the 15 countries that were spending over 18% of revenue on debt payments, 14 countries saw real public spending per person fall in the years leading up to the pandemic.

Since the pandemic, the majority of IMF loans have continued to include conditions that force more public spending cuts to public healthcare, public wage bills and social security benefits. At the very time, that people need social protection and universal healthcare, these are being denied by the international institutions controlled by rich countries. But women are not just users of public services, they also predominantly work in these sectors especially in low-paid care work and so their incomes and employment are also affected by IMF-driven public wage freezes and service cuts.

Sadly, none of this is new. The austerity agenda and the slashing of public services such as education and healthcare have been conditions of IMF and World Bank loans for decades. Sacrificing the very things that women and girls need to improve their wellbeing and future prospects.

When the healthcare sector lacks resources and cannot provide sufficient healthcare for the population, women usually end up becoming the main providers of care. This care, however, is not free as women pay by losing time they would have used for paid work, education or leisure, with detrimental short- and long-term effects on their wellbeing, status and livelihoods.

Conditions on loans can force governments to reduce their spending on gender-based violence prevention and refuge services, leaving vulnerable women without support and protection.

Women are also on the sharp end of the climate crisis. The diversion of resources to debt repayments leaves little to no resources for building climate resilience for global South countries who are on the frontlines of the climate emergency. Women are often the main providers of food and water in their households and so the burden of climate-driven failed harvests, food shortages, rising food prices and shortages of clean drinking water fall disproportionally on women.

On International Women’s Day we want to highlight these impacts of unjust debt on women’s lives which are multiplied for women who also face discrimination based on class, race, disability and sexuality. We offer our solidarity to the women who are affected by unjust debt and to the women actively fighting the patriarchal, neoliberal economic system. We stand with them in our fight for real solutions to address the debt crisis right now and to prevent them in future.