New figures released today by Jubilee Debt Campaign show that developing country debt payments have increased 120% between 2010 and 2021 and are higher than at any point since 2001. Average government external debt payments were 14.3% of government revenue in 2021, up from 6.8% in 2010. Payments shot up in 2020 and have remained high in 2021.

High debt payments are preventing many countries from tackling and recovering from the Covid pandemic. Rising US and global interest rates in 2022 could further intensify the debt crisis many lower income countries are facing. The US Federal Reserve meets on 25-26 January to discuss options for raising interest rates through 2022.

“The debt crisis continues to engulf lower income countries, with no end in sight unless there is urgent action on debt relief. The debt crisis has already stripped countries of the resources needed to tackle the climate emergency and the continued disruption from Covid, while rising interest rates threaten to sink countries in even more debt. G20 leaders cannot keep burying their heads in the sand and wish the debt crisis away. We urgently need a comprehensive debt cancellation scheme which compels private lenders to take part in debt relief.”

In 2022, of external debt payments due to be paid by low and lower middle-income governments, 47% are to private lenders, 27% multilateral institutions, 12% China and 14% governments other than China. 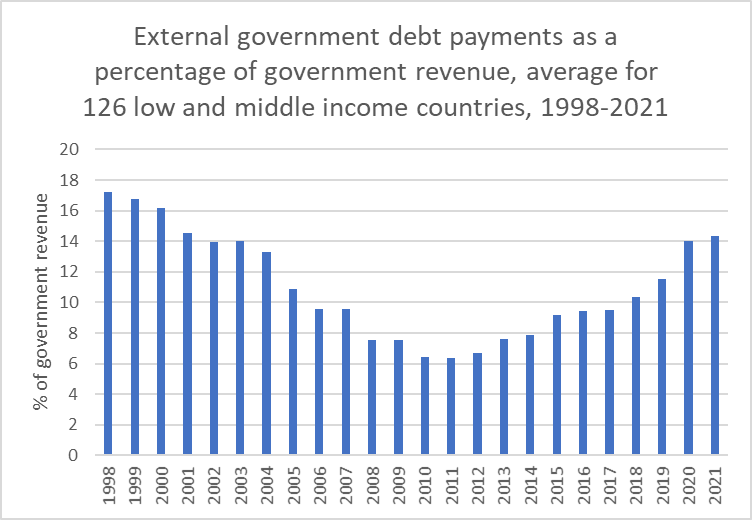 Jason Braganza, Executive Director of the African Forum and Network on Debt and Development (AFRODAD) said:

“Since before the pandemic, AFRODAD had cautioned on the debt precipice facing many African countries. Covid-19 accelerated an already deteriorating situation and will reverse the socio-economic gains of the past decade. We have consistently said the current debt relief measures aren’t good enough and have called for a truly inclusive debt relief programme with all creditors; and a comprehensive debt cancellation programme. This is what will save African citizens from difficult times ahead.”

Faced with the prospect of an intensifying debt crisis in 2022, the World Bank has called for faster action on debt relief. On 18 January President of the World Bank David Malpass tweeted: “With too many developing countries facing record levels of external and domestic debt, we cannot afford to wait any longer. The world’s poorest urgently need deep debt relief, enhanced debt transparency and a rebalancing of creditor/debtor powers.”

The G20 created a new debt relief scheme at the end of 2020, called the Common Framework, but none of the countries which have applied for it have yet had any debt cancelled.

Jubilee Debt Campaign calculates the external government debt payments as a proportion of revenue for 126 low- and middle-income countries for which there is data. The data is from IMF Debt Sustainability Analyses, IMF programme documents and the World Bank International Debt Statistics database.

The average is the mean unweighted average for these 126 countries. This therefore shows the pattern across developing countries, rather than being dominated by larger countries, as using aggregate figures would.

The countries in crisis or at risk in each category are below. Methodology, data and sources are at the Debt Data Portal https://data.jubileedebt.org.uk/