BlackRock was asked to comment on the estimates on 18 March but has not given any response.[2]

Zambia is in a debt crisis, with spending on social services falling by 21% between 2019 and 2021.[3] The Southern African country applied for a new G20 debt relief scheme at the start of 2021 but has not yet had any debt cancelled. The Zambia Civil Society Debt Alliance and Jubilee Debt Campaign have calculated that Zambia needs two-thirds of its debt, and all interest payments, cancelled, to be classed as having a sustainable debt by the IMF.[4]

BlackRock is Zambia’s largest known bondholder but refused a previous request by Zambia to suspend debt payments in 2020 and has not offered to restructure any of the debt.[5] Negotiations on the debt restructuring are due to take place in April. G20 Finance Ministers will also be meeting on 20 April, during the IMF Spring Meetings, to discuss the progress of the debt relief scheme, the Common Framework. 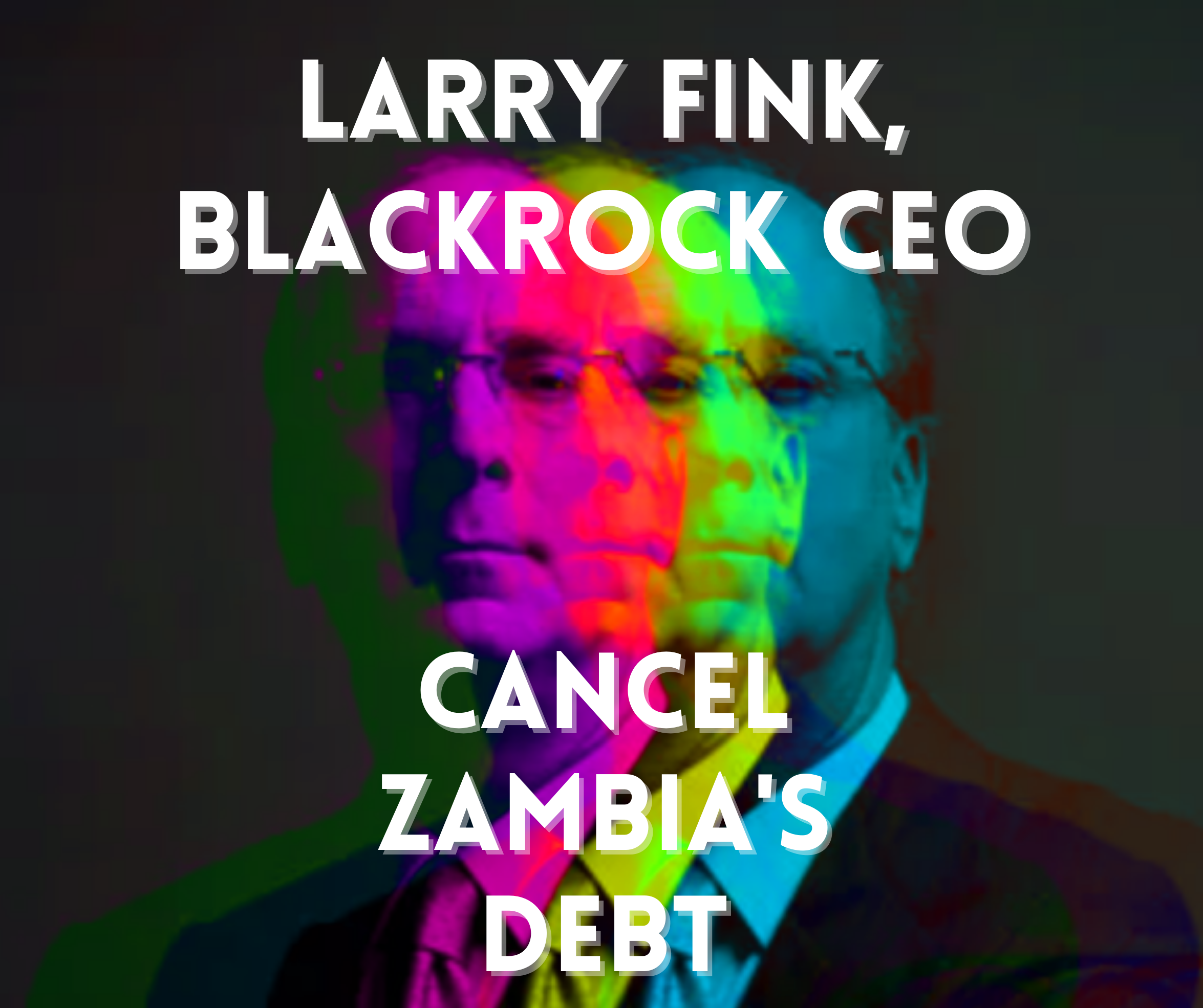 Isaac Mwaipopo, a member of the Zambia Civil Society Debt Alliance, and Executive Director of the Centre for Trade Policy and Development, said:

“Zambia’s debt crisis is preventing people getting access to healthcare, education and other social services. We urgently need all of Zambia’s lenders, including BlackRock, to agree to cancel debt so we can recover from the Covid pandemic and the economic crisis we face. Loans were given at high interest rates, and have been trading at low prices, so it is only fair lenders agree significant debt cancellation, rather than making mass profit out of the Zambian people.”

“It is unfair for BlackRock and other lenders to make massive profits out of Zambia’s debt crisis. If BlackRock refuse to cancel Zambia’s debt, then the UK and other G20 countries should support Zambia to stay in default on BlackRock, and pass legislation to make them accept debt cancellation.”

BlackRock owns $220 million of Zambian bonds, the largest of any known holder, and 7% of the bonds in total.[6] Jubilee Debt Campaign estimates that a majority of BlackRock’s bonds have been bought since September 2020 when Zambia requested the payment suspension, suggesting it could not pay.[1] BlackRock’s potential profit comes from buying bonds at below face value and the high interest rates on the debt. Since the start of the pandemic in early 2020, Jubilee Debt Campaign has estimated Zambia’s bonds have had an average face value of 59 cents on the dollar,[7] and the average interest rate on its bonds is 8.1%.[8] The reason for the high interest rates, and the debt being bought and sold at well below face value, is because of the high risk of not being repaid. As an asset manager, the profit BlackRock makes from its investments is ultimately shared between itself and clients who have invested in its funds.

BlackRock is due to release its quarterly earnings and profit figures on 13 April. The company is the world’s largest asset manager, managing $10 trillion of assets.[9]

[1] The figures have been calculated from reporting on Refinitiv of BlackRock’s holdings of Zambia’s bonds, and the average price the bond have traded at over relevant periods, taken from Business Insider.

Using this methodology, Jubilee Debt Campaign estimates BlackRock has paid $165 million in total for its $220 million of holdings in Zambia’s debt. Payment in full would therefore represent a profit on principal payments of $56 million.

Using this methodology, Jubilee Debt Campaign estimates BlackRock will be paid $123 million in interest payments. Total potential profit if paid in full is therefore $180 million. $180 million of $165 million paid for the bonds would be 110% profit.

Even if BlackRock bought all the debt at face value when it was issued, the high interest rates on the debt still mean it would make 92% profit on the debt. In total $2.94 billion was lent through the three bonds. If they are paid in full, including all interest, then by 2027 Zambia will repay $5.6 billion (2.7 billion more than was lent / 92% more than was lent).

[2] BlackRock did respond to a letter in early 2021 on the general need for debt restructuring in countries eligible for the G20 Common Framework, saying:

“As a fiduciary, long-term investor in these countries, BlackRock shares your goal of helping them address and recover from the Covid-19 crisis. As such we have been and remain prepared to engage constructively with any sovereign issuer that seeks to achieve debt relief through a consensual restructuring that considers the country’s immediate needs, enables sustainable growth, and maintains or restores the country’s ability to access international capital markets.

“This means that we are a constructive stakeholder in any restructuring, with our focus on driving consensus around a transaction that protects the value of our clients’ assets while also providing debt relief that creates adequate opportunity for a country’s recovery and future sustainable growth.

“In regards to broad-based approaches contemplated by the international community, we believe that a key objective of debt treatments should be to avoid damage to other countries, and so case by case approaches will always be preferable. With that in mind, we view positively the ongoing efforts of the international community to construct and propose potential solutions to both the immediate, COVID-19 driven issues, as well as longer term sustainability issues.”

[3] Real terms (2021 prices) government spending on health, education, social protection and water and sanitation was KW1,979 per person in 2019, and fell to KW1,563 per person in 2021, a fall of 21%. Calculated by Jubilee Debt Campaign from Zambian budget bpeeches.

[5] Zambia requested a suspension of payments on 22 September 2020. All of Zambia’s private lenders refused the request, except for Italian Bank Intesa Sanpaolo (from IMF document linked to here).

The Zambia External Bondholder Committee also explicitly refused the request, Debtwire has reported that Blackrock is one of the members of the Committee (https://www.mergermarket.com/assets/Zambia%20Sovereign%20Report%20-%20FY19.pdf).

Following the rejection of the request for a suspension, in November 2020 Zambia defaulted on an interest payment on one of the bonds. The External Bondholder Committee said in response “members of the Committee reserve the right to consider other options and remedies as provided for under the terms and conditions of the Eurobonds should substantive progress fail to be achieved on addressing the issues raised in numerous communications with the authorities and their advisors (Newstate Partners LLP. Zambia External Bondholder Committee: Response to Consent Solicitation Request/Default on US Dollar Bonds due 2024. 16/11/20.). The “other remedies” available to bondholders are to sue Zambia in London. All three of the bonds are governed by English law.

[6] Data downloaded from Refinitiv by Eurodad in February 2022. Zambia owes $3 billion in foreign currency bonds, so $220 million is 7% of the total.