***UPDATE: The Chancellor has replied to this letter. You can read his reply here.***

Over fifty MPs from every party in the UK parliament have written to the UK Chancellor, Philip Hammond, calling for action to strengthen transparency around loans to governments at this year’s G20 Finance Ministers meeting. The letter includes a call for the UK to introduce a requirement that for a loan to a government to be enforceable in the UK, it must have been publicly disclosed when it was given. Currently 48% of international loans to governments are owed under UK law, with the other 52% owed under New York law. 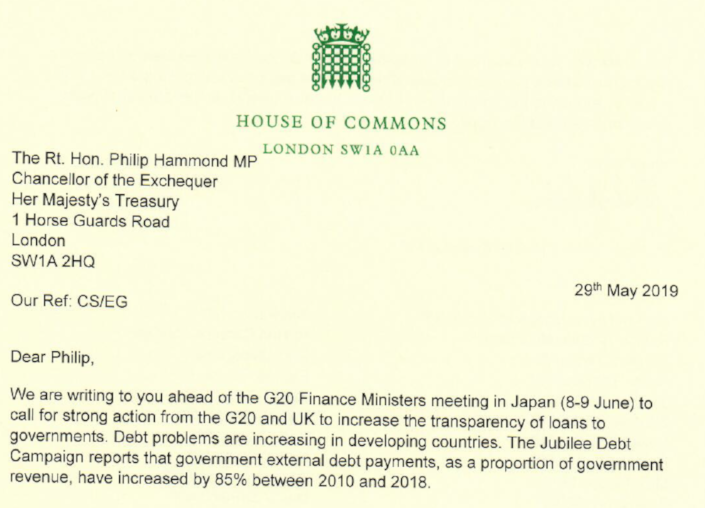 The letter has been sent ahead of the G20 Finance Ministers meeting in Japan from 8-9 June. Debt transparency and sustainability is one of the key items on the agenda following hidden debt scandals in countries including Mozambique and Republic of Congo.

The MPs call for the G20 to create “a publicly accessible registry of loans to governments” and to commit “to disclosing the loans they give to governments on this registry”.

The MPs also call for “all relevant jurisdictions, especially the UK and New York, to introduce a requirement that for a loan to a government to be enforceable it must have been publicly disclosed in the registry when the loan is given”.

The MPs conclude the letter to Chancellor Philip Hammond saying: “We agree with your statement in December 2018 that you ‘reject the idea that laxer regulation makes a jurisdiction more attractive’. We hope you will make the UK a world leader in improving the transparency of loans to governments, in the interest of good governance around the world.”

“It is brilliant that MPs from all parties in the UK parliament are calling for action to strengthen transparency around loans to governments transparent. In the main cases of secret loans to impoverished countries, such as Mozambique and Republic of Congo, the loans were given under UK law by UK-based or listed companies. While increased international attention on lending transparency is welcome, so far the G20 governments have done little in concrete terms to get more public disclosure of loans. The UK government and G20 need to act now to ensure civil society, media and parliamentarians can get access to information on debts taken out by governments on behalf of the public.”

The full letter can be read here.

For further detail read Jubilee Debt Campaign’s briefing with over 40 civil society organisations: “Transparency of loans to governments: The public’s right to know about their debts”

The full list of signatories to the letter is: